As part of the 15th edition of the Ramallah Contemporary Dance Festival (RCDF), we were delighted to support the participation of the Swiss Compagnie 7273 with their production “3.”

“Three” is the number of dancers on stage; three women who began this story in 2016, during a first version of the play. Five years later, they deliver a refined version of extreme intensity, in which they appear to use dance as a means of empowerment and emancipation.

The performance was recorded in live conditions and streamed via www.citerne.live, as was many of the festival’s performances, due to Covid-19 limitations.

RCDF runs between July 8 and 16, 2021. This year’s edition comes under the theme “Distanced but not Apart” and offers performances, workshops and discussions, both online and offline. 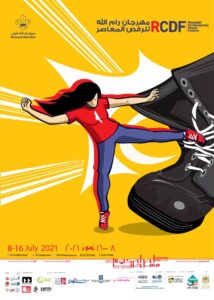